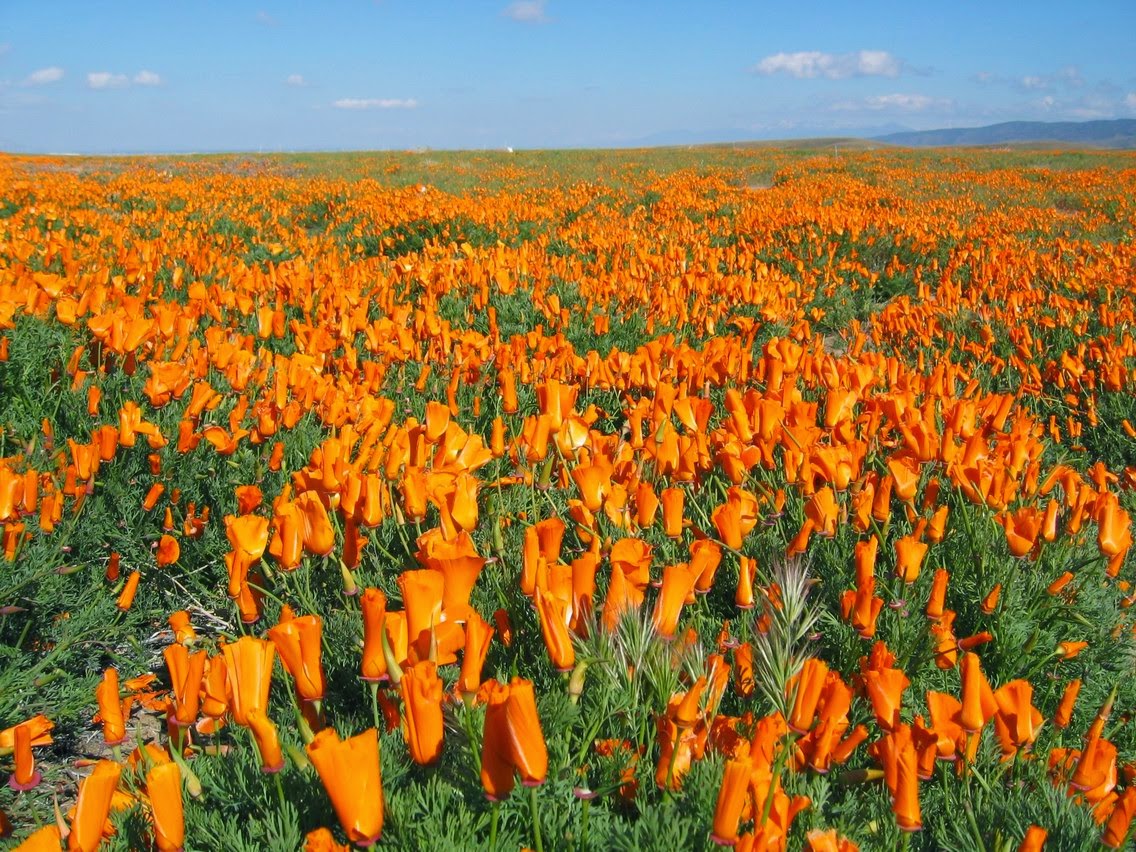 It's come to my attention that I complain a lot about the place I live: Palo Alto, the Bay Area, California. Actually, I love it here. I was born here — Stanford Hospital, that is. Yep, that makes me a “California native,” just like Eschscholzia californica. It also makes me a “Native Son of the Golden West,” even though I’ve never really considered joining that club.

I was moved from our Portola Valley home at the ripe age of 3 and raised in a desert. No, really, a real desert. Las Vegas. A real real desert, both culturally and environmentally. (Ironically, California hit a drought shortly thereafter, and the grove of Monterey pines hugging our old back yard dried up like so much tumbleweed.)

Being a smart child, as soon as I was old enough I moved back here — Stanford University, that is. I can’t quite say I sucked the marrow out of my time there, but I do still bleed Cardinal red. I fell in love with the palm trees, the redwood trees, the eucalyptus trees; the vernal sunlight glinting off of Lake Lagunita (yes, children, once upon a time this lake contained water!); the morning fog, and the evening breeze that rolled in reliably enough to make the 4pm windsurfing class legendary.

When it was time to leave The Farm and ply my trade in advertising, I was advised to "move to New York." "Or Chicago." But California poppies don’t do well in urban jungles or subzero gales. So I moved to San Francisco. I learned a little more about fog there; but all my complaints about Winter in July were forgotten once October rolled around, with its miraculous Indian Summer that lured me — and the rest of The City — out to stroll and dine and people-watch and generally do what young urban professionals do on balmy autumn evenings.

SF was perfect for me: diverse but not overwhelming. Class without mass. And, a seemingly infinite reach with virtually no sprawl. Just 49 square miles, if you believe the guidebooks, yet just outside my door I discovered unbelievable food and wine… unreal beaches, forests, parks and islands… and unimaginable art, architecture, and artifacts from a very young state’s very rich history. I surfed the tidal wave of the dot-com boom with one foot in the past and another in the future. My journey had taken me from the desert to an oasis.

I was married in Sonoma, amidst grape vines and blue oaks and cattle, the scent of sage scrub blending with the sea air. Later, the urge to spawn brought a salmon-like pull back to my own birthplace, and I became a homeowner right back in, yes, Palo Alto. One and a half blocks from Stanford, in fact; close enough to hear The Band rally Branner or stroll over to Sunken Diamond for an evening game. And here in Palo Alto I’ve not only made my homes and raised my children, but also built my landscape design business, which connects me intimately with all the natural wonders of the place I live.

I tell you about my history and love affair with the Bay Area for no other reason than to help you understand why I am so cranky about living in the Bay Area. It is precisely because I love it here that my heart breaks to see companies along California Avenue overwatering their oversized lawns in the midst of our worst drought ever, threatening to turn us into the desert I thought I left. My soul aches as old buildings — not glamorous, perhaps, but undeniably full of character — are ripped down and replaced with yet more glass and steel shoeboxes. My old office was in one such building, with a violin teacher for a neighbor. The building is gone, as is Larry. Tech offices. We — the people who live here, who love it here — are losing our home. Foreign investors pay ungodly amounts for properties they don’t live in and couldn’t care less for. Our Golden State is shriveling and browning just like the raisins so famous in my advertising days.

And the worst part? The worst part is that we are doing it to ourselves. We remain silent while our city officials permit the so-called “development” of generic office buildings even as existing structures sit vacant. We plant sprawling, gratuitous lawns no child will ever play on. We hire garden janitors who blow away all the nutritious organic matter our plants drop, then scatter fertilizer on the naked ground, then irrigate until water and fertilizer run off the soil and down the gutters. We drive too much, spend too much, use too much and think too little. We are making our Bay Area — the one we love, the reason we moved here, the only one we’ve got — extinct.

In younger years I happened to visit Los Angeles — okay, Santa Monica, but really, it’s all L.A., right? — on a day the winds were blowing just right and you could see the  mountains risen against a blue sky while standing on the beach. I was stunned. And I realized, this is what the earliest generation of Angelenos saw; in fact, it’s probably why they moved here. I would have. But then they brought their cars; and their neighbors brought more; and soon, the very thing that drew the crowds became shrouded in smog, almost a myth: the thing everyone believed was there but had never seen, except on those rare days when the winds blow just right.

And so, it’s precisely because I love the Bay Area that I am scared that if we don’t change our ways, we will become Las Vegas, or more likely Los Angeles. A place that people speak of in the past tense, with a certain reverence but also resignation: “Remember when we could see the foothills from here?” “Once upon a time, this lake used to contain water.”

But we don’t have to live out that fate. We can change our ways. And I love my home enough that I’m going to continue complaining when we don’t.

Hi John,
I have been perusing through your blog and was amazed at Lake Oroville....crazy dry! I live in Virginia and we get enough rain to make most people happy, even the farmers. But you guys have a hardship. Which brings me to my post question. Do you know much about clay pot irrigation with ollas? YouTube Dripping Springs Ollas Video and get a glimpse of a water saving vessel. Happy Gardening,
Mary Kathryn

Great story. Thanks for sharing. :)