Raymond in Sonoma County, who believes the return of circa-1998 wealth is more likely than romantic evenings in his hot tub, writes:

"I have a 10' x 10' concrete slab that was designed for a hot tub, but in these troubling economic times, we've decided to simplify and use the space for a vegetable garden. My question: Can I build a planter box directly over the concrete? And if so, how deep would it need to be to be successful? I'd rather not remove the slab; who knows, someday we may be back to ordering groceries from WebVan and toasting the new economy in the 'tub."

Raymond, your champagne dreams are as refreshing as a spring breeze. And who knows? Perhaps your windfall will come from cornering the market in microgreens or breeding the Next Big Thing in broccoli — in your new vegetable garden!

I absolutely think you can build a planter box on top of the pad, and here are a few things I would do to ensure success:
2 comments: 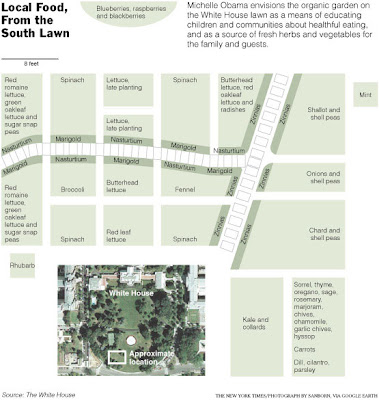 In trying economic times, folks are inclined to grow their own produce. George Ball (of Heronswood Nursery, Burpee Seed Co., The Cook's Garden et al.) recently wrote that, despite declining sales of ornamental plants, "we’re awash with early orders of herb and vegetable seeds, transplants and fruit bushes." And yesterday we learned that the First Family is putting in a little plot as well. (Although no beets — yet one more way the President and I are alike.)

This really is great. If more of us grew more of our own food, it could solve a myriad of problems, not to mention easing our budgets. And: in order for growing your own to really pay off, you need to avoid the $64 tomato. One of my favorite planning guides is Square Foot Gardening by Mel Bartholomew; but there's no shortage of good ideas online.

Whether you're planting square inches or square acres, the key is to have fun with it. If you've got a technique or a plan that you're really proud of, please share it with us!
2 comments:

If you were following me on twitter yesterday you know I was at the SF Flower & Garden Show. It's an interesting show for a number of reasons: the new venue, the specter of finality (since lifted), and — I'm sorry, I have to say it — the meh-ness of the gardens themselves.

Why do people go to garden shows? In a word, for inspiration. We want to see the newest plants, the prettiest pots, the brightest flowers. We want to be captivated by bold visions and ooh and ah over their realizations.

(Now, a disclaimer: I have never exhibited in a show like the SFFGS. It is an extraordinary commitment of time, energy, goodwill and money, none of which I have in excess. And anyone who does undertake a display has my respect and admiration — regardless of my opinion of the results.) 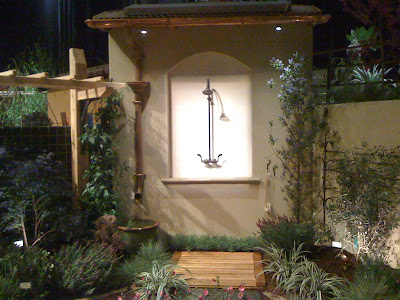 Rebecca Coffman's outdoor indoor showerSo to my mind, there are two kinds of show gardens that really knock socks off: one is the garden you, the viewer, could actually implement at your own home but had never thought to. This is the triumph of creativity over reality, doing more with less, making your rooftop into a succulent paradise, using radiators for retaining walls, breaking rules of logic (but not of nature: there's no pretending that the purple Dodonaea will stay a cute little foundation shrub, no matter how cool it looks against the blue spruce). Last year Rebecca Coffman did a nice job bringing the indoors out, and Michelle Derviss took my breath away with her zen spa garden.

Livin' Cheap in BajaThe other type is the garden that you, the viewer, could never possibly implement because it has never existed before and can never exist again. This is the triumph of imagination over reality: doing more with more, creating soaring masterpieces that Kublai Khan would envy. The best example from my recent memory was Gary Gragg's 2006 pipe dream: you couldn't do this at home, you wouldn't, but it really engaged your imagination and inspired that "what if...?" feeling that gives designers like me the bum's rush.

At this year's show, I saw a bunch of pretty plants; I saw a lot of big plants crammed into small spaces; and I saw a lot of ideas — but not a lot that successfully made the leap to reality. I liked Studio Replica's oversize concrete pots. I loved Andrea Hurd's dry-stacked stone wall and arch. I was impressed with Tilden Landscaping's craftsmanship in stone, metal and wood. I was utterly confused by the Urban Garden from UC Berkeley students (hey "kids": show, don't tell). But I didn't see Xanadu; and only one garden really stayed with me after I had left: Rebecca Cole's "Sky's The Limit," which earned too many awards to list.

Alice has some nice images of Rebecca's show (as well as others) over at Bay Area Tendrils; and you can see and read Rebecca's own experience with the exhibit on her blog. The reasons I think it was successful are straightforward: she had a simple concept, executed with a simple palette of colors and materials. Period. 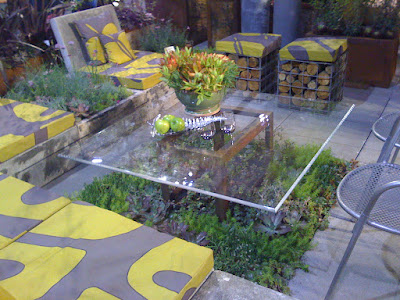 Rebecca didn't try to shove two acres of plants into 200 square feet. She didn't try to pretend that Ceanothus and Lavandula bloom at the same time. She used materials available to us all, creatively, artfully. And we ooh and ah, and go home to figure out how we might achieve a little of the same. In other words, she inspired us.

Brava, Rebecca. You truly are the best in show. And to every other designer reading this: how are you going to raise the bar over the next year?
2 comments: 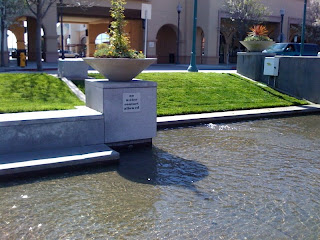 Seriously? You're going to build this big beautiful shallow stream, connect it to a pedestrian mall with an enticing sun-drenched lawn... then say "no water contact allowed"? 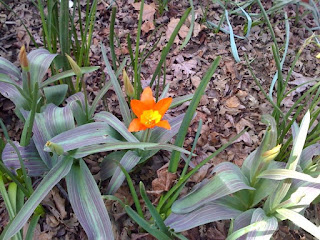 Not to be left behind, the first few Tulipa 'Juan' started blooming
today. In addition to the name and the fantastic hot orange/yellow
flower, I really like the purple variegation on the foliage. This has
naturalized quite nicely here in Palo Alto; again, from www.brentandbeckysbulbs.com
.
No comments: 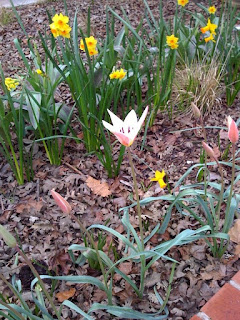 The first buch of Tulipa 'Lady Jane' opened up today, one year
naturalized. (That's fragrant Narcissus 'Falconet' in the background.)
Both from www.brentandbeckysbulbs.com.
No comments: 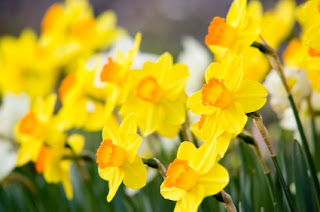 The sun's been shining for a week now, so it's officially spring around here no matter what the calendar or thermometer say. If you need further proof: both my neighbor and I busted out our lawn mowers in the last week for the first time in months; my broccoli, which I swear I just planted, has bolted and gone to flower; the annual weeds like dandelion and Italian ryegrass have kicked it into overdrive and set seed already.

In other words, this is the time of year when our gardens are most likely to get away from us. A little rain, a little sun, a little extra warmth, and everyone's feeling happy. But for those of us who desire to chaperone the party a bit, this can also be a very challenging time, and it's when we are most likely to break out the RoundUp, Corry's Slug & Snail Death and other chemical assistants to give us a hand.

As much as I prefer gardening organically, I recognize the realities of modern life; I also much prefer a handwritten note to email, or reading the newspaper to reading a blog, yet here we are. I also will not be out in my yard hoeing away every last ryegrass seed, so chemicals can be a "technology" I use to achieve my goals with the time and energy I do have.

Like any tool or technology, RoundUp is not inherently evil. Sure, it may have been created by evil men (although I doubt it), it may harm the earth and its inhabitants, and there's no question that it's integral to the morally corrupt business strategies of companies like Monsanto. But on its own? RoundUp is just a chemical compound, and it's up to you and me to use it responsibly.

The chemical isn't the problem. The problem is, we lose sight of our real goals (a vibrant, healthy garden environment) in the glare of short-term fixes. Add to that the urgency panic inspired by a garden quickly outpacing us, and our tendency is to grab the nearest solution and drench our problems with it. But if we stop, take a jasmine-scented breath, and think, we can actually make choices that fulfill our short- and long-term needs. For weed control, try repeated applications of undiluted vinegar, or boiling water, or boiling undiluted vinegar (after a reality check). For slugs and snails, an iron-phosphate compound such as Sluggo is extremely safe (and more convenient than beer traps).

There is no shortage of organic gardening blogs out there, as well as Cooperative Extension offices with expertise far beyond what I'll ever accrue, including strategies for integrated pest management. Start there, then take another look at the garden you really want to have... does RoundUp really belong in it? 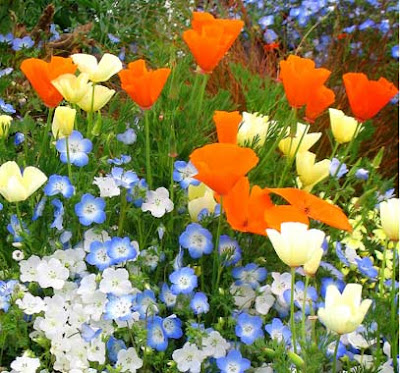 I Hate Being Right About This 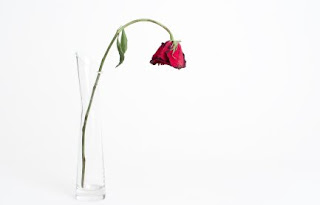 Rain or no rain, it's officially a drought emergency. I hate being right about things like this.

So: are you ready to cut your water consumption by 20%? Even before you kill your lawn, schedule a house call: water agencies in San Francisco, the East Bay, Redwood City, and most* of Santa Clara County offer free basic inspections that calculate water usage and point out opportunities for conservation both indoors and out. Santa Clara Valley Water District also is hosting a "Water Efficient Landscaping Workshop Series" including one of my favorite local designers, Alrie Middlebrook.

And if you want to get an in-depth analysis of your landscape water use, contact a certified irrigation contractor, who will put your system through its paces and really optimize it according to detailed, standardized guidelines.

The prospect of reducing our water use by 1/5 is about as cheering as the stock market these days. But if you've been considering changing up your landscape, this is an opportunity to do it right — and perhaps even get paid for it! With a little professional advice, you can wind up with a yard that is easy on the eyes, easy on the wallet, and easy on the earth as well.
2 comments: