Learning from the Big Guys, Pt. 2 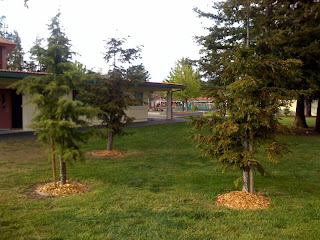 Some of the knowledge we lose living in urban and suburban areas is how plants naturally grow. As in, how BIG. As a result, we put big shrubs in the garden where little shrubs should go (I tend to make this mistake with Viburnum); and place trees too close to structures or crowd them together.

In this example at a Peninsula elementary school, two redwoods and one Atlas cedar have been triangulated about 8 - 12 feet on center. Now, this would make a nice grove of small ornamental trees such as cherry or crabapple. Or a compact windbreak of columnar specimens such as cottonwood or 'Fastigiata' hornbeam. But come on! These are long-lived forest giants, wanting to spread 50 feet or more. Even if they were to grow this close together in nature, they would probably be successive generations, never really competing with each other for light, water, nutrients and space.

As this trio matures, they will create a maintenance headache for the Arborist who has to keep their limbs pruned clear of each other (with probably unattractive results). Even so, they probably will struggle along together, limp into midlife, and never achieve the cool grove I bet their planters intended.

The lesson here: work with, not against, Mother Nature. She always wins.
6 comments: 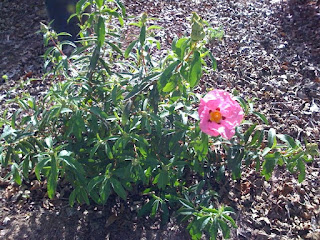 Today the purple (or orchid) rockrose, Cistus purpureus, began its show. This is one of my favorite shrubs: drought tolerant, evergreen, resinously aromatic foliage, and of course these flowers that go with any color I can imagine. I especially enjoy it with silver companions such as Salvia chamedryoides, Santolina, and Lavandula stoechas. 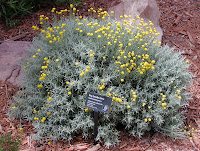 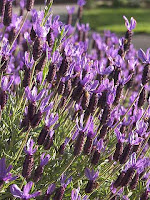 In fact, my only problem with the Cistus is that it gets big - up to 4' wide if left unchecked. I'll be heading mine back after its first bloom cycle, but we all know it's a futile effort. I've got 3 of these fellows in my Palo Alto garden, all runts adopted from the nursery's clearance shelf at the end of last summer. I must have been very good in a past life for such good garden karma now!

Although the exact size of the aquifer has yet to be determined, reports indicate it may be hundreds of miles across and more than 10,000 feet deep, billions of gallons in total. "We are delighted to say, the drought is over," Schwarzenegger proclaimed at a beachfront press conference, a gleaming drinking glass on his podium. "This discovery will provide enough water for every man, woman, child, farmer, rancher, business, school and park in our great state to live the California lifestyle without ever again worrying whether there is enough water to waste."

California's $36 billion agriculture industry applauded the announcement. "Our crops, orchards and ranches have been in decline for well over a decade now," said Andrew Simon of the California Department of Food and Agriculture (CDFA). "This [discovery] means we will be able to get back to our business of feeding the world." 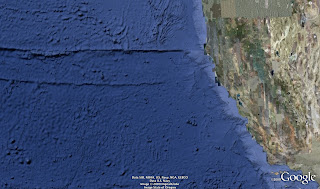 The newly discovered reservoirGov. Schwarzenegger said the state will petition the federal government for funds from the recently approved stimulus package to develop filtration, conveyance and distribution systems throughout the state, a further boon to California's languishing economy. "This is the genius of President Obama's economic recovery plan," he said. "Investing in our infrastructure will produce exponential returns when we give people jobs and deliver water to where they work and where they live." The state already is in discussion with neighboring Nevada and Arizona to export its newfound bounty to those parched regions, and plans are under study for a "main vein" pipeline to route water from California east through the entire country. "This could be the next transcontinental railroad," said Schwarzenegger, announcing that project bids will be solicited within weeks.

Ironically, the aquifer was discovered by two recently unemployed construction workers, Eric Lucas and Dante Christopher, both of Palo Alto, Calif. Although neither has a background in hydrology or environmental science, both knew immediately they were on to something big last month while visiting the nearby coastal town of Pescadero. "We were just chilling on the beach," said Mr. Lucas. "The next thing I know, Dante is shouting 'Water! Water!' First I called 911," he said, "but we got disconnected, so I called the newspaper" who in turn called the state water agency. Neither man is aware of any plans to name the body of water in their honor.

The sheer size of the reservoir has made mapping of its boundaries tedious, which in turn has inflamed long-simmmering tensions between California and its neighbors. The states of Oregon, to the north, and Hawai'i, to the east, both claim the water reaches into their territories. And in what could turn a domestic dispute into an international incident, Mexico also contends that a portion of the water is theirs, a claim Gov. Schwarzenegger downplayed. "The proud nation of Mexico and the great state of California have a long and rich history of sharing resources," he said, "and we certainly will work together to ensure an equitable distribution of this resource as well."

The discovery has raised almost as many questions as hopes. One story circulating the Internet claims the volume of water actually could increase over time due to factors related to global warming, to which a DWR spokesman responded "we can only hope." Other critics have noted the water's purity is unproven, and it may be polluted by vegetation and animal waste.

The DWR spokesman refused comment on another allegation, that extreme salinity in the water makes it unfit for drinking or irrigation. "This is a proud day for our state and our nation" said the spokesman. "Let's not let irresponsible rumor-mongering dry up our celebration."
7 comments: