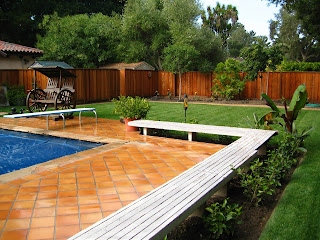 Last week I met with a client whose landscaping was recently completed. As we sat poolside in the shade of an umbrella, he told me, "this is my favorite place in the world. I just step outside and I'm on vacation." Who was I to disagree?

Even if we're not attempting to recreate Bali in our backyard, don't we landscape in hopes of making a destination for ourselves, a getaway that's more "get" than "away"? I've got kids to adore, I've got a business to run, I don't have the time or the money to hop on a plane to visit a better life. Even on the hottest days, the thought of driving to the beach gives me pause: who wants to pack, schlep, do battle with the general public on crowded freeways and busy beaches, finally arriving just in time to turn around?

But when I can step outside my back door and be transported to another place or time, now that's luxury.

When I can't wait to sit poolside in the shade of an umbrella… when my favorite childhood memories return, prompted by a scent… when I feel my pulse slow, watching clouds at sunset… I have the luxury of truly relaxing. When the fragrance of star jasmine wafts into my bedroom at night… when I can invite friends over and grill an amazing, impromptu meal in my outdoor kitchen… when the butterflies waft around my face while I enjoy a cup of coffee in the morning sun… then I've got not just a yard, but a destination.

Best of all, it's not just one destination, it's several. It's a space for my alone time. 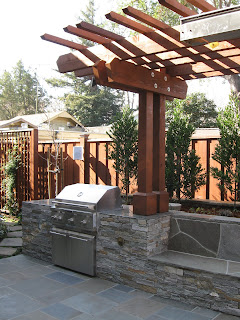 It's a space for my children and me to play. It's a space to indulge my senses, and a space to retreat to when my senses are on overload. It changes with the seasons, delighting me with surprises even as it soothes me with its predictable constants.

There are practical aspects, too. Every dollar that I invest in my yard is a dollar I don't need to spend on airfare, or room tariffs, or waitstaff gratuities. My travel time is zero. No jet lag, no language barrier, no cultural adjustments needed. Also, no chance of sellouts, blackouts, overbookings or lost reservations. In my garden, I am always welcome.

We think of a resort vacation as an indulgence. Yet the most indulgent act of all might be staying home, and taking a holiday in our very own backyard.
5 comments: 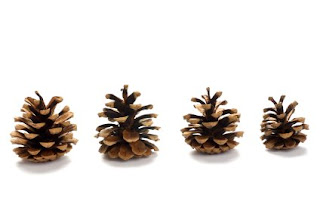 Today marks the fourth year of this blog, and it's incredible to look back and note how much has changed since that first post. It appeared almost a full year before the venerable Garden Rant, a month before the venerable Pruned. House & Garden was still in publication. There were still gardening shows on HGTV.

"Social media" really wasn't, yet. There was no public Facebook, no Twitter. (Given how much time the latter sucks from my day, this may be the most incredible change of all.) And while Google was going strong, it didn't yet own Blogspot (my original host) and therefore hadn't morphed it into Blogger (my current host). There also was no SketchUp and no Google Earth—two tools which are indispensable to me now.

Since that first post I've also moved to a new house, started (but not yet completed) new landscaping, turned 40, turned 41, won "Landscapers' Challenge," started (but not yet completed) a landscape architecture program, learned AutoCAD, abandoned AutoCAD in favor of VectorWorks, and migrated almost my entire production process from hand-drafted to digital. 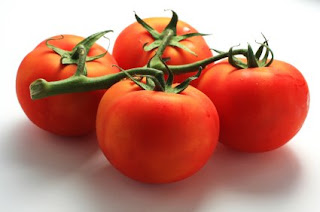 I'm not really a gardener, in the usual sense, and I never intended this blog to be about gardening—no shots of my lavender seedlings, the first snowdrop, the last pepper. Instead, I hoped to interest people in the idea of gardening: making, keeping, enjoying and living in gardens. Yet there it is, over on the right, there: undeniable evidence that I've written about "gardening" 57 times, more than any other topic. I guess I shouldn't be surprised; after all, what's a "garden designer" without the garden?

I also never expected to become quite as environmentally outspoken as I have; but somehow "environment" has become my second most popular tag. Then again, it's sort of difficult to have gardens without an environment. In the past four years, our climate has changed noticeably, our state has gone into drought, and our political and corporate leaders have discovered that "sustainability" can be more than just a buzzword. In my work, too, I've become much more conscious of my opportunity and responsibility to not just make places prettier, but to make them better. 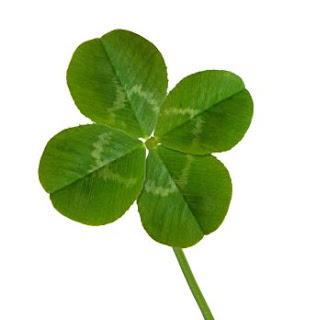 One other thing I couldn't have expected when I launched this blog was my readership. Yes, you. Just when I think I've written dreck that no one cares about, there you are with a comment. And even if you don't comment (though I wish you would), my draconian spy software tells me you're still reading, and that you come back for more. That was my greatest hope four years ago… and it's the best anniversary present a blogger could ask for.

Here's to a four-year germination: a good start.
6 comments:

Getting Your Money's Worth

I wrote previously on when and why to take on your own project. In a nutshell: do what you love because you love to do it, not to save money — then hire a pro for the rest. 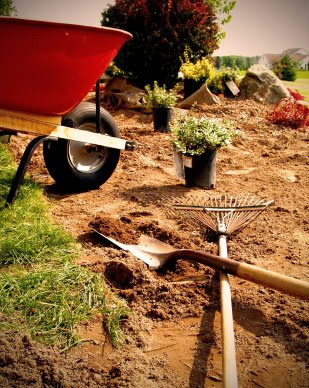 But if you're inclined to do any of it yourself, you probably are conscious of the money. So whether you work with a designer first or go straight to the contractor, here are a few ways any homeowner can work more efficiently with your landscape professional:

Chances are, even in This Economy, your landscaping is going to cost more and take longer than you expect. But there's nothing that says you can't get your money's worth.

What are some ways you've made a project more cost-effective?
3 comments: 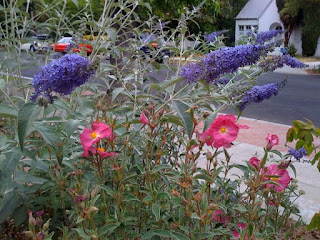 I can't tell you how to pronounce it, but I will tell you the 'Lochinch' butterfly bush (pictured here with pink Cistus 'Victor Reiter') is one of my favorite Buddlejas for the garden. Its light blue-gray foliage is a wonderful foil for almost any other color—burgundy Berberis, purple Limonium, white 'Iceberg' rose, orange poppies or Gaillardia—the list goes on.

So, too, do the fragrant blooms, which begin in late May and don't quit until December if I deadhead consistently. It's a vigorous plant: even when cut back hard over winter, it will hit 10 to 12 feet of new growth in a single season. The habit is fairly upright, which makes achieving a vase shape easy if space is limited. And, of course, it attracts butterflies, hummingbirds, bees and other pollinators in droves. (The pale lavender flowers are particularly stunning with yellow swallowtails alighting on them.)

'Lochinch' has performed equally well for me in a part-sun border in loam soil next to an irrigated lawn, and as a solo specimen in a full-sun, full-clay xeriscape. Really, my only complaint is that the leaves are so heavily felted that pruning them can trigger an allergy attack in seconds. Other than that, 'Lochinch' is a standout in any perennial landscape—no matter how you say it. 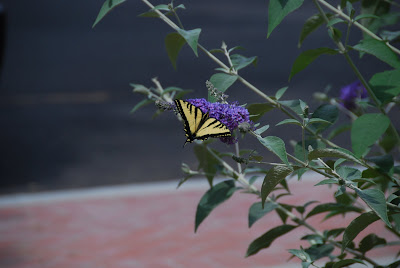 The Age of Value 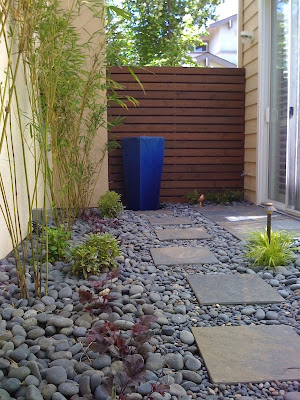 Not low cost—just high valueI went to a presentation today sponsored by a couple of my favorite suppliers, Bamboo Pipeline and Monrovia Growers. And one of the executives, whose job it is to understand things like business cycles, described our current era as "the Age of Value": consumers obviously aren't throwing money around indiscriminately; but despite our economic woes, neither are they looking for the flat-out cheapest solution. Nope, we're still willing to spend our money — we just insist on getting best-in-class results for it.

Which made me think about why, despite our economic woes, people are still paying good money to hire good landscape designers and contractors. As I've written before, my work isn't exactly the foundation of Maslow's hierarchy, but this isn't about the hire-me-versus-do-it-yourself dilemma. This is about spending thousands of extra dollars to ensure a premium result. It's about specifying and buying Monrovia plants and FX Luminaire fixtures instead of whatever's on sale this weekend at the big-box store.

I'm not the least expensive designer out there, and definitely not the fastest. So it's understandable that I'm not the best fit for everybody. But the ones who do call me, and ultimately hire me, know what they're getting. They know I'll give them a clear vision… attention to mundane details… plans that deliver more information… plants that are perfect for their site and different from everyone else's. In a word, I'll give them value.

It's the same with contractors. I work with some of the best in the business, and quality ain't cheap. I know (because I've been in those shoes) the shock of finding out how much a seemingly simple plan actually costs. I've gasped upon learning that "just" prepping this little site is half of the client's budget. And I know that someone else could do it cheaper. Someone else can always do it cheaper. But what value gets lost? The quality of construction? The attention to detail? The level of contact and communication before, during and after the job? There's always a tradeoff. Always.

I'm grateful that my clients and I — and hey, in This Economy, anyone — has money to spend on luxuries like landscaping. I don't take it for granted, and I'm not looking to take advantage. In fact, no one I know is; not even the highest-priced contractor or landscape architect. We all take it as an honor that you would even consider entrusting us with your money. And we're going to do our damndest to reward you with some pretty high value in return.
3 comments: