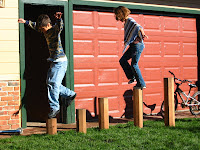 If you've been wondering how to start planning your own home garden, or what types of landscaping elements are best for kids, or how to attract butterflies and "good bugs," then please register for the class I'll be leading at Gamble Garden in Palo Alto next month.

In a 3-session series, you'll learn how to analyze your property and assess your needs; how to determine what structural features will be useful, beautiful, and safe for your entire family; and how to determine what plants will be best suited for your family's garden. We'll also explore plants that are toxic for children and pets, review different types of swings and play structures, and lay the foundation for creating your own landscape plan.

Once you're registered for the class, please feel free to contact me with advance questions or topic requests. Whether you're already working with a landscape designer or contractor, or thinking of planning and installing the garden yourself, I guarantee you'll learn something useful (and have fun in the process!). There are only 25 seats per session, so sign up now! I hope I'll see you there...
No comments:

I recently learned that the pineapple guava tree, formerly known as Feijoa sellowiana, is now going by Acca sellowiana.

This sort of re-naming, while confusing, isn't uncommon: Stipa tenuissima is now Nassella, Diosma pulchrum is now Coleonema, Atriplex spinosa is now Grayia, Laurentia fluviatilis is synonymous with Isotoma fluviatilis is synonymous with Pratia pedunculata, and so on. Which begs the question, if these supposedly sacrosanct botanical names can be so fluid, why do they matter?

It helps to understand the difference between botanical, or "scientific," names and common, or "vernacular," ones. While common names such as "pineapple guava," "breath of heaven," and "blue star creeper" roll easily off the tongue (and offer ample opportunity for seductive descriptions in mail-order catalogs) they are imprecise, usually relying on associations not obvious to everyone. What is a "lily of the valley" to you? An herbaceous perennial, or an evergreen shrub? For some real entertainment, peruse Wikipedia's list of plants by common name: not only can you see why ordering a "white birch" could get you into trouble, but you'll also see that a brown daisy, yellow daisy, black-eyed Susan, and brown-eyed Susan are all the same plant, depending somewhat arbitrarily on where in the U.S. you live.

Botanical names, on the other hand, are determined systematically rather than arbitrarily, and are consistent throughout the world. Every species has one, and only one, botanical name; and that name describes not only its unique characteristics but also its relation to other species. This system was developed by the premier 18th-century naturalist Carl Linnaeus, who classified all living things hierarchically by their common characteristics rather than, say, geographic origin. In botany, we are usually most concerned with the genus and species names; less frequently with the larger family or the smaller subspecies and/or varietal names. So our old favorite the black-eyed Susan can most accurately be described as Rudbeckia hirta — that's genus Rudbeckia, species hirta, which tells us it's related to yet different from Rudbeckia fulgida and Rudbeckia laciniata. (Now we only need to decide whether we mean the variety R. hirta var. angustifolia, or R. hirta var. pulcherrima.)

Seems pretty straightforward, right? Well, not quite. In a future post, I'll talk a bit about the "Deep Green" project spearheaded by Brent Mishler at Berkeley, which aims to trace plants' evolutionary paths and reclassify them in a cladistic, not Linnaean, manner — meaning that the venerable Zea mays would be renamed Mays Zea Gramineae Monocots Angiosperms Eukaryota Life. Not quite as poetic, perhaps, but technically more accurate… and definitely more precise than "corn."
No comments: 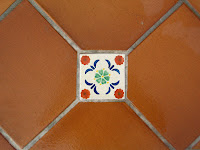 I recently had a couple of experiences, wholly unrelated to landscaping, that reminded me of the most important skill any landscape designer can possess.

In the first instance, I phoned a large chain retailer (whose name rhymes with Blarget) to see whether they had a certain item in stock. Naturally, my call was intercepted by a computerized menu of options: "Press 1 for store hours, press 2 for directions," etc. etc. Unfortunately, this is exactly what I expected from a large chain retailer. But when I finally rang through to customer service, something wonderful happened: the human at the other end of the line cheerfully answered, "Thank you for calling, may I help you find something?"

I was elated. Her question couldn't have been more precise or appropriate. After all, why else do we bother calling large chain retailers? (Unless we need store hours or directions, but that would have been solved earlier in the call.) It wasn't just a lazy "how can I help you?" (oh, let me count the ways) — and it allowed me to quickly, efficiently get the information that was important to me.

In the second instance, my family and I were at a large chain restaurant (whose name rhymes with Schmilli's) for the second time in seven days — first outbound and now homebound on a long road trip. As chance would have it, the same server was working that had helped us on our first visit (which, by the way, was entirely uneventful). And damned if she didn't remember, without missing a beat, exactly what each of us had ordered seven days before, and would we like the same again? (Ironically, she said her boyfriend thought that with a memory like hers, she could be doing so much better than waitressing. I tipped generously in hopes of suggesting otherwise.)

So what do these scenarios have do to with landscape design? Everything. Because to create gardens that are personal, we need to (1) ask the right questions and (2) remember the details. It's not enough to ask, "What's your favorite season" or "List your favorite plants" or "What's your favorite color?" Those questions won't yield the important answers. What's important is why you like that season, or what those plants or colors mean to you. That's how I get to know you. And with that understanding, I can interpret you in all the details of your garden — not just the plants I select but their placement and combinations; not just the color of materials but their texture and type; not just the location of a water feature but the quality of its sound. These are the details that make your garden yours — and they'll bring you joy every day you come home to them.
No comments: