The Jesusita Fire raged for days through Santa Barbara, California and continued to burn until the Santa Barbara County Fire Department declared the fire to be officially under control on May 22, 2009. In its wake, the fire burned over 8,700 acres of land and destroyed 80 homes.  — Santa Barbara Botanic Garden 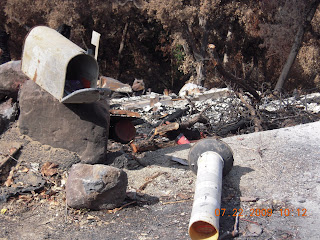 On my recent vacation we passed through Santa Barbara and stopped by the fabulous SBBG, which had taken a big hit from the Jesusita Fire. Just up the road, a pile of twisted metal and black and gray rubble bore witness to the fire's devastation. On May 5, that was someone's home. On May 7, it wasn't.

Over on the other side of Mission Canyon, beautiful homes stood untouched, a testament to the latest heroism of thousands of firefighters. A couple of years ago, a Cal Fire captain in San Mateo told me that crews will focus their efforts on homes they know they can save, rather than spend precious time and resources on potentially losing battles. It was a harsh wake-up call: if your home isn't accessible or easily defensible, it's as good as gone. 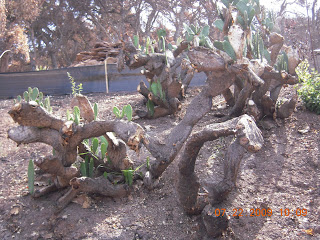 Our mood was somber as we surveyed the scene. But then I noticed something odd: These charred sticks that used to be trees, they were sprouting. Growing. Regrowing. They were alive, and nothing as petty as an 8700-acre inferno was going to change that.

I was filled with hope. This is why we garden: to witness the unpredictable, play some part in the impossible. We plant a Salvia and hummingbirds materialize out of thin air. We plant the smallest of seeds and watch tiny leaves emerge after the coldest winters. We plant a tree, knowing we won't get to relax in its shade but that our children's children might. I'm sure I'm not the first to say it, but landscaping is an act of faith, a confidence that things will be all right — even if we can't know when or how. 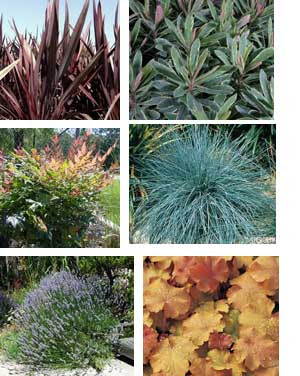 A few weeks before our trip, the contractor remodeling the home next to ours had invited me to redesign its front yard. We both were delighted with my combinations of Phormium 'Dusky Chief', Euphorbia 'Helena's Blush', Nandina 'Gulf Stream', Festuca ovina glauca, Lavandula 'Provence' and Heuchera x 'Caramel'.

During our time away the weather had been hot, very hot, and as we rolled up to our driveway I wasn't surprised to see a few of my container plants had died. But the real shock was the house next door. My beautiful, drought-tolerant creation was… gone. All gone. Replaced by no less than the gratuitous lawn I despise. Explanation? The homeowner got cold feet, wanted "ordinary." Apparently extraordinary was too good.

I was devastated. I'm still upset. But I think of the people who lived in the house that is no more, and I realize that there are worse things than a garden gone wrong. 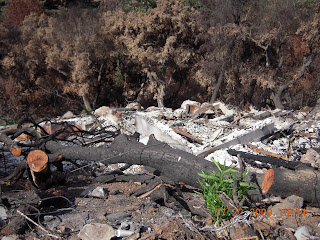 And I think of those blackened twigs sending up their bright green leaves, and I realize that Nature has a way of righting herself.

All we have to do is keep the faith.
8 comments:

What a difference four degrees makes.

That's the difference in latitude between my office in Palo Alto, Calif. (37.4 degrees, just south of San Francisco) and my current vacation spot in Carlsbad, Calif. (33.1 degrees, just north of San Diego). 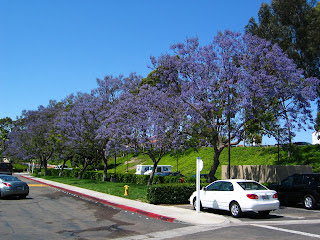 Up north, we can't grow Jacaranda mimosifolia very successfully due to our typically frosty and occasionally freezing winters. Down here, the tree's vibrant lavender blooms are pretty much ubiquitous this time of year.

Up north, our soil is heavily influenced by at least four local ancient volcanoes — mounts Diablo, Hamilton, Tamalpais and Sonoma — with a resultant fertility that made today's Silicon Valley the original "Valley of Heart's Delight." Down here, with the nearest volcanoes some 4–5 hours away, the local soils are much more estuarine, sandy and lacking the minerals and clays that nourish "exotic" plants.

Obviously there are pros and cons to each latitude, but you can see how just a few degrees of separation can significantly affect environments and lifestyles. Where would you rather live? And if prognostications of global warming expanding the equatorial zones are correct, and Palo Alto comes to resemble Carlsbad and Carlsbad comes to resemble Puerto Lobos, how would your lifestyle change?
4 comments: