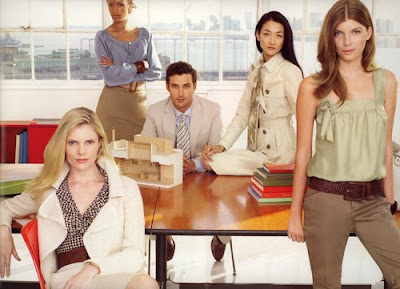 I live in just enough of a vacuum that it's always gratifying to stumble across someone else voicing an idea I thought only I had. Case in point: the Banana Republic "Architects" ad I noticed on Hwy. 101 in San Francisco this spring, quickly and lovingly excoriated by Gawker. (Never mind that I'm only finding the post 6 months later.) My response had been, "who are these people?", and I think Flashman's reply is probably about right. Which further proves my long-standing claim that there's a very thin line between landscape/architecture and advertising: the only thing more important than a good concept is a good presentation.

And that transports me to another thought I've had recently: the "ad man" character, so prominent from the 1980s (thirtysomething, Melrose Place, Crazy People, Nothing in Common) through about 2000 (Bounce, What Women Want) seems to be giving way to the "young architect" character (Click, The Lake House, The Last Kiss) and, now, the "landscape architect" character (Just Like Heaven, Breaking and Entering). (On the other hand, this seems to mirror my own career trajectory. So maybe it's just me?)

I might venture that it has something to do with our global consciousness: as television matured in the '70s advertising messages evolved to be more subtle and pervasive than ever before, perhaps reaching their zenith with the marketing of a certain actor-turned-president. Sure, "Bewitched" had given us the goofy ad man decades before, but in the "greed is good" decade advertising took on a new allure… and we loved it.

Now, our thoughts are on the environment and our nests within it. Again, the architect isn't a new character; but in an affluent society living in a post-9/11 world, his role is paramount as he creates (or re-creates) our cities (pride, honor) and our homes (refuge, ego). And the landscape architect, well, he represents nothing less than the savior of our planet — not a warrior, though (that would be too scary), but an approachable, "outdoorsy, artsy" type. That's comforting, isn't it? Break out the wool sweater and fire up the Prius, we're going into the hills to visit Al Gore.

I don't mind the stereotype, really I don't; I just hope the media will treat the profession a little more accurately than they ever did advertising. I never did set foot in an agency where the creatives were playing paintball in the halls or binge drinking before deadline (although maybe I just never worked at the right shop). Dare we show the paying public that landscape architects spend more time bleary-eyed in front of a monitor than strolling through forests? Mostly, I hope the media will reflect the growing trend in my industry toward making things right — restoring wetlands, increasing green open space, correcting decades of environmental mismanagement — and not just making things pretty.
No comments: 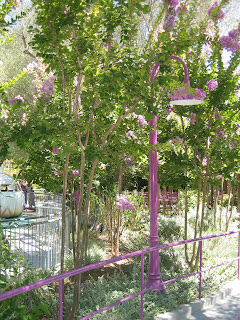 This little vignette is on display right now at Gilroy Gardens, not only home to the well-trained "circus trees" but also a dandy theme park that will keep the tots (and hort-geeks like me) entertained all day.

What caught my eye here was how much attention has been paid to the details: the lamp post and building trim match (or at least coordinate with) the blooms of the Lagerstroemia (crepe myrtle). And for good measure, the "garlic bulb" rides to the left are also streaked with violet, just like a real garlic bulb.

Is there a color in your garden that inspires you? Bring a bloom to a good paint store — they can match the color, or at least get this close. 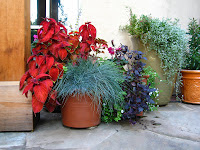 Now: did you also notice the Stachys, Lavandula and Helictotrichon down at ground level? These cool silvery tones are a terrific complement to the warm violet. On a color wheel, these two colors aren't quite opposites (think of blue and orange, purple and yellow, red and green) but neither are they adjacent (such as a violet-red-orange combination). 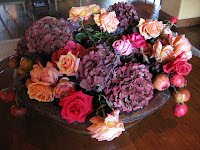 Rather, the red-violet and blue-green are two legs in a triadic combination. The third leg of the triad would be yellow-orange; the closest we'll get is the exfoliating cinnamon-tan bark of the Lagerstroemia.

Perhaps because one of my favorite childhood toys was a set of translucent color paddles, I'm able to visualize color combinations pretty readily. But if you're not, pick up a color wheel and keep it on your desktop… pretty soon you, too, will see these subtle (or not so) color combinations that are all around you. 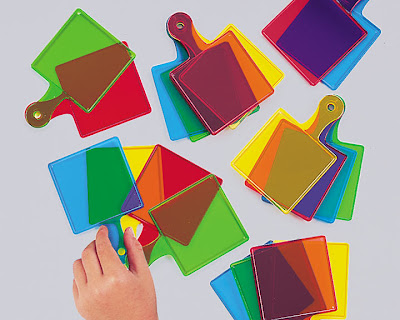 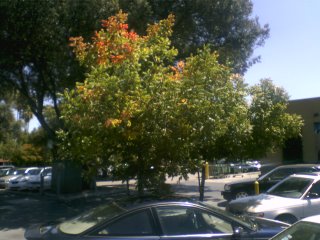 Pistacia chinensis is the first tree to show autumn color this year... since there hasn't been a real cold snap yet, I would guess it is responding to the shorter days, which I've noticed too. Funny how sensitive we are to these seasonal shifts… if we're paying attention.

Email ThisBlogThis!Share to TwitterShare to FacebookShare to Pinterest
Topics: seasons

Symbolism at the Site 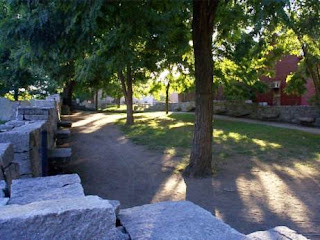 House Enthusiast's beautiful description of the Salem Witch Trials Memorial in Salem, Mass., illustrates how important symbolism is to a site — and how including it subtly can be especially powerful.

In the case of this memorial, no signage announces the site, just subtle engravings of the statements made by the accused as well as their names, method of execution, and dates of death. Those engravings are on twenty granite benches which levitate on the face of a wall, creating tombstones for the deceased, whose ignominious executions precluded any tombstones of their own. According to the site's designer, James Cutler, the black locust trees planted in the courtyard were chosen as "the tree from which these innocents were hung." And I would say it's not irony but careful planning that sites the memorial adjacent to Old Burying Point, the graveyard in which lies the grave of Judge John Hathorn, whose witchcraft verdict led to the deaths of the accused.

These and numerous other details would have no significance outside of this site. And if more obvious means of communication had been chosen — say, a large plaque announcing the memorial, or upright "tombstone" pillars instead of the horizontal granite slabs — the visitor would be less intrigued, less inspired to contemplate rather than spectate.

In the garden, we generally seek to symbolize less grisly memories, but the lessons are the same: use a soft brush to illustrate with contrast, color and texture; find clues that are specific to the site, and its residents; and don't state the obvious — often a whisper is louder than a shout.
No comments:

Keeping the 'G' in HGTV 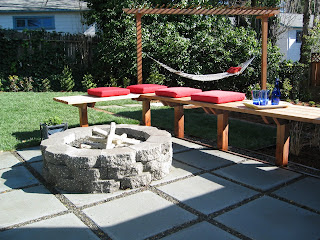 I'll be back on the air this Saturday, Aug. 11, at 9:30 in the morning on Landscape Smart, this time transforming a confused and abused back yard into a clean, contemporary space that's as cool as the other side of the pillow. Geometric plantings and bold lines simplify the space and make it appear larger; my favorite feature of all is the extra-tall hammock arbor that's just the right scale for the space. Check it out and tell me what you think!
No comments: