Learning from the Big Guys, Pt. 7

It's been an incredibly busy year so far, leaving me with lots of thoughts swirling around in my head but precious little time to put them in writing. But my daily travels take me past a few examples of poor landscape planning, and I'm never too busy to learn from the big guys. Today we examine some examples of what happens when the age-old rule "right plant, right place" is broken. 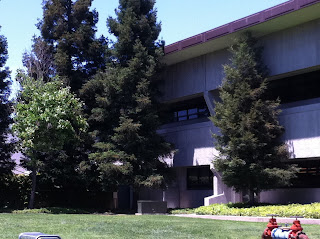 It's a great idea to plant tall trees on the south and west sides of a building. They help shade the structure and reduce heating costs, especially in a sun-drenched climate like Palo Alto. It's also a great idea to use native species such as the coast redwood, Sequoia sempervirens. What's not such a great idea is planting a tree that wants to be 100 feet tall beneath eaves that are 40 feet high. Something has to give here, and I'm betting it won't be the building. Anyone want to make odds on how many days before this poorly-planned tree is removed?

The Palo Alto JCC is a wonderful example of modern urban infill. It's got intimate courtyards and simple but effective stands of plantings that make it a great space for people. Unfortunately, the designers consistently underestimated the demands of the Center's vehicular traffic, specifically the turning radii cars and trucks would need. Perhaps the planners were simply optimistic that the center would attract fuel-efficient small cars rather than large trucks or SUVs; however, even the average minivan (of which the family-oriented Center attracts plenty) is challenged by turns that are too sharp and lanes that are too narrow. As a result, a couple of walls in the parking garage have been damaged by car bumpers, and curbs have had to be cut or removed and reconfigured. Orange safety cones are proliferating, and overall the traffic areas are looking like a patchwork of temporary fixes — except they're not temporary. 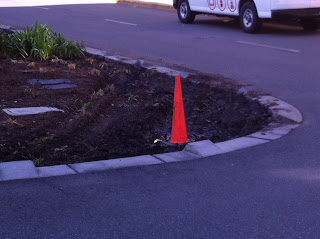 Outside, the entry driveway circles around a center median that is not contained by a raised curb. On the one hand, this is useful because it allows the median to receive stormwater from the surrounding pavement, an effective environmental strategy (the Center earned LEED Silver certification). On the other hand, the absence of a curb means that vehicles can — and do — cut the turn and drive through the planter. This means more orange cones, and a chronically muddy mess that always seems to hold standing water. It's too compacted to sustain plants, and they'd probably get driven over anyhow. The lesson here? Turns require far larger radii than we may think: at least 15-20' inside radius for a passenger car, more for service vehicles such as delivery trucks, and a correspondingly large outside radius so the front outside corner of the vehicle's bumper can sweep through the turn without hitting tangential walls or parked cars or people. If you've absolutely got to have a tight turn without a curb, at least don't put plants inside the curve — use paving stones or some other material that can take the abuse. 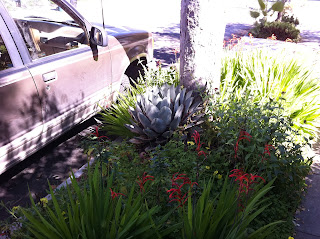 Speaking of cars and people, it's always useful to remember that people get into and out of vehicles, and enjoy a bit of clear space in which to do so. This isn't exactly a "big guy," but it is a useful reminder that heavily armed plants such as Agaves — as well as spiny Berberis, Pyracantha and roses, and even sharp-foliaged plants such as Mahonia and Picea (spruce) — make great barriers but usually aren't great selections for a space where people or pets will be passing close by. On the other hand, though, I'd wager this tree hasn't suffered a door ding or the indignity of dog pee in years, so maybe this planting strategy is genius after all — "right plant, right place" doesn't always mean what we think.
No comments: