Especially when you're trying to increase your home's curb appeal, it pays to pay some attention to what's happening next door. Let's consider some of our typical neighbors, and how you might take a cue from them:

Hooray. It's "Earth Day." One day, 24 hours, for us to be more aware and appreciative of the Earth's environment.

Never mind that the other 364 days of the year we're driving our SUV around town, alone and comfy in our captain's chair.

Or that we still leave the water running while we wash our hands with antibacterial soap.

Or that our salmon are now in as much trouble as our tuna.

I put honey in my tea today and was confronted by two unwelcome thoughts:
2 comments: Links to this post

A Little Cold For April If you're thinking the last few days have been a little cold for April, you're right. In fact, yesterday San Francisco tied its record low for the date and Oakland set a new record, according to NBC11.

By itself the cold snap wouldn't be a problem; but with the weather so deliciously warm for the past few weeks, just about every last plant that had been holding on to dormancy has decided it's finally time to bust out the buds... which leaves them vulnerable to these frosty conditions.

Making the problem worse is the wind, which can chill us down another 10 degrees or more and, even worse, increases the rate at which plants transpire (i.e. lose) water. So the biggest danger isn't actually freezing: it's dehydration.

Ironically, the best defense is the same practice you would use on the hottest days of summer: water your plants, slow and steady, at least once if not twice a day. Make sure the irrigation arrives right onto the soil around the plant's dripline — ideally you have a low-flow system so there's little or no loss, but if you do have spray heads make sure they're not wasting water up into the air. The breeze is often calmest in the pre-dawn hours, so that's a good time to irrigate with little fear of the wind carrying the water away.

(On a side note, if your system is "misting" clouds of water up into the air, your system may be operating with too much water pressure — usually a result of improperly sized pipes. If you can, choke down or manually reduce the flow to your irrigation mainline to see if the misting stops.)

Also, make sure your mulch is adequate: I like to recommend a 2- to 3-inch deep layer of redwood bark or coco hulls, but I've also taken to using the coffee grounds my local java joint bundles up and sets aside. (By the way, they smell awesome for a day, then they just smell like stale Folger's.) Mulch helps the soil retain water, and it also creates the cool, aerated conditions that beneficial mycorrhizae love. No doubt the weather will warm up again soon, and your plants and soil will be prepared for their next challenge: our Mediterranean summer.
No comments: Links to this post If you're planning a construction project here in Palo Alto later this year, odds are you're going to be held to a higher standard than ever. As reported in the Palo Alto Weekly, a proposed building ordinance will require that residential construction ultimately comply with the "GreenPoint Rated" checklist developed by California's Build It Green initiative; and that commercial projects meet national LEED standards.

On the home front, here are some of the items Build It Green includes on their landscaping checklist:
No comments: Links to this post

Seriously? The Worst Tree Ever?!

OK, I admit I was having some fun with my April 1 post. But Jane over at Garden Design Online alerted us to a feud (in my own community, no less! what kind of investigative journalist am I, anyway?!) (oh, yeah, I'm not) that really does demonize the venerable redwood: Basically, as reported back in February in the Los Angeles Times and more recently in the New York Times, a half-dozen existing redwoods are shading a neighbor's new solar panels and therefore running afoul of a 1978 state law.

Our local state senator, Joe Simitian, has introduced a bill to inject a little sanity into the issue; the bill would give existing trees legal precedence and priority over more-recently added solar panels.

Now if someone would only do something about those damn poppies. Photo by Vanessa RoachIf you haven't already signed up for the Gamble Garden Spring Tour, don't wait another day. Not only do you get exclusive access to five of Palo Alto's most beautiful private gardens, Gamble's own grounds will be buzzing with a plant sale, helpful master gardeners, a home and garden vendor fair, and chocolates, tea and cookies. This is the premier event from one of the peninsula's finest garden societies, so register now while advance ticket discounts are still available.
No comments: Links to this post

The Worst Tree Ever

You know that beautiful, majestic, mature redwood tree in your neighborhood — maybe even in your yard? The one that's the pride of your community?

But the disturbing fact is, a grown redwood sucks up more water each and every day — 500 gallons or more! — than any other garden plant, including the oft-demonized lawn. Even the most water-unthrifty among us, spraying the lawn (and sidewalk and gutter) 10 minutes every day at 25 gallons per minute, might spend 250 gallons a day… but not 500 per plant.

And that's not even to mention that redwoods, like wolves, are hardly solitary creatures. They grow in groves, and if you've ever been to Muir Woods, you've seen it: as soon as one tree dies, a "fairy ring" sprouts up around its base. One down, five take its place. So now instead of 500 gallons per day, we're talking 2500 gallons. Do you want that water bill? I don't.

Will your garden be next?But it's not just water. The fairy ring is a perfect example: is there any better definition of a noxious weed? I mean, we curse the fluorescent yellow oxalis this time of year, but in a few months it's gone. We lament the smothering of our native hillsides by scraggly Scotch broom, but at least we can still see the hillside. A fairy ring gets going in your next door neighbor's lot, you may as well get yourself an old Underwood and start composing manifestos.

Plus, redwoods create fire danger. Their copious duff and bark are rich in tannins, which suppress not only weeds but also fire, which would be all well and good except that, as the wise people in our government who are paid to think these things all the way through know, the West's wildfires are becoming more catastrophic because there are fewer small fires occurring, so that when a fire does get going, it's got more and larger trees (i.e. more fuel) and spirals out of control much faster. 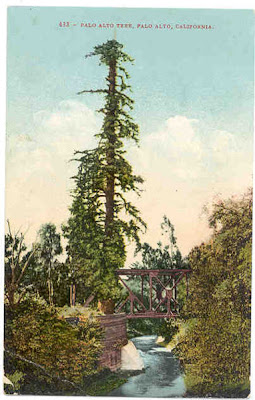 El Palo not-so-Alto-anymore
Quite honestly, redwoods are such a menace it's difficult to understand why they're the state tree of otherwise enlightened California — or why my own fair city not only hasn't cut down its decrepit namesake and renamed itself South Menlo or Steve's Town or something actually worthy of its citizenry, but actually has accorded these monsters "heritage tree" status; and so protected, they'll continue to grow and consume even more water — leaving even less available for the rest of us in these near-drought times.

Look: I appreciate the spirit of well-meaning groups like Save The Redwoods and Sierra Club and The Nature Conservancy, who valiantly endeavor to preserve the few remaining places that are so pristine it's almost a transcendent experience to visit. It just breaks my heart they so willingly ignore no less than Time magazine's reporting that "redwoods create their own microclimate" (which explains why gardening around them is an ambitious affair at best) to lionize the legendary Sequoia as if its utter domination of the landscape is somehow a good thing. "Drippy, dark and closed in," says one of California's foremost native plantsmen of a Sequoia habitat. "Cut the forest down and you usually get Northern Coastal Scrub." Sequoia-free = tabula rasaThe irony is that once a redwood is removed, instantly it becomes apparent how much light and air are available to the gardener and the garden. Roses can grow where only ferns dared try; moss and musty odors disappear overnight; our dream of a water-wise garden actually has a chance of becoming a reality.

Still want a tree in that spot? Now you're free to choose. Plant a mighty oak! (Uh, well, except that oaks can drink 250 gallons a day and still become overbearing monstrosities that can never be cut down. Nevermind.) OK, plant a… willow! Or a birch! (Um, wait, those are both riparian species, so they'll suck up all your water and invade your sewer line.) A jacaranda, then! (Actually, it gets a little cold here for those to really thrive.) Jeez, a magnolia! (Yeaahhhhhh… despite their ubiquity, they actually heave hardscape like crazy and look pretty bad without constant moisture and humidity. Not a good choice for our summers.)

Look, what's wrong with you?! Why are you so hung up on specifics?! Once that damn redwood is gone, you can do whatever you want! Okay, I'll take the initiative: so that we can write the last chapter of this nightmare, I'll personally contact every city council on the peninsula, as well as the California EPA, and implore them to rescind the redwoods' heritage tree status.